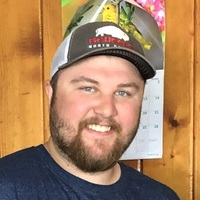 Please share a memory of Daniel to include in a keepsake book for family and friends.
View Tribute Book
MINOT, ND -- Daniel J. Fyckes, 27, of Minot, North Dakota, formerly of Norwood, NY, passed away unexpectedly on Saturday, December 24, 2022 due to apparent flu complications. Dan was born on November 30, 1995, in Massena, NY the son of Sterling and Nancy (Rakoce) Fyckes. His passion was playing hockey and he was a member of Norfolk-Norwood Minor Hockey and of the Louisville Lightning 14U team that had won the Northeast Regional Hockey Championship. He won several NY State Championships with the St. Lawrence Thunder team. He graduated from Norwood-Norfolk High School in 2013. Taking a gap year after graduation, he played hockey for the Morrisburg Lions in Morrisburg, Ontario, Canada, before playing Junior A hockey in New Hampshire for the Fighting Spirits. At the National Championship in Las Vegas, he was recruited by Dakota College of Bottineau, ND, and participated on a team that won the National Junior College Hockey Championship. After receiving his Associates Degree in Applied Science (AAS) from Dakota College, he worked at Investors Real Estate Trust (IRET) and Thompson and Sons before finding his preferred job at Absolute Comfort in Minot as a Heating, Ventilation and Air Conditioning (HVAC) Technician. Dan played hockey in a Minot adult hockey league on Wednesday nights and was an outdoorsman, who loved hunting, fishing, and camping trips with his daughter. Dan and Layla had a special bond singing country music, baking, eating breakfast at Kroll's Diner on Saturday mornings, attending the Minot Minotauros (Tier II Junior League) hockey games, and playing with their dogs, Ruger and Ruby. Dan was excited that Layla enjoyed skating as much as he did so he enrolled her in a Learn to Skate program and she's becoming a good little hockey player. He is survived by his daughter, Layla, Minot, ND; parents, Nancy and Sterling; brother, Andy; nephew, Karson Fyckes; maternal grandfather, Richard Rakoce; great uncle, Elmer Rakoce, and several aunts, uncles and cousins. He is predeceased by his maternal grandmother, Shirley Rakoce, and paternal grandparents, Sterling and Eleanor Fyckes. Family and friends may call at the Buck Funeral Home in Norwood on Wednesday, January 4, 2023 from 11-2 and 4-7 p.m. A prayer services will be held at 6:30 p.m. with Rev. Shane Lynch presiding. In lieu of plants and flowers, memorials are preferred to the Louisville Lightning or Norfolk-Norwood Youth Hockey Program in Dan's memory and memories and condolences may be shared online at www.buckfuneralhome.com and to view other condolences, please visit www.thomasfamilyfuneralhome.com . The Buck Funeral Home is serving the family of Daniel J. Fyckes.
To send flowers to the family or plant a tree in memory of Daniel Fyckes, please visit Tribute Store
Wednesday
4
January

Share Your Memory of
Daniel
Upload Your Memory View All Memories
Be the first to upload a memory!
Share A Memory
Send Flowers
Plant a Tree