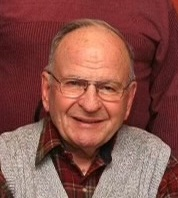 Please share a memory of Alfred to include in a keepsake book for family and friends.
View Tribute Book
NORFOLK – Funeral Services for Alfred J. Smith, 88, a resident of 6 ½ South Main Street, Norfolk, will be held on Friday, October 1, 2021 at 10 a.m. at the Norfolk United Methodist Church with Rev. Jim Foote presiding. Burial will be held in the Visitation Cemetery, Norfolk following the services. Family and friends may call at the Buck Funeral Home in Norfolk on Thursday, September 30, 2021 from 2-4 and 6-8 p.m. Mr. Smith passed away Tuesday, September 21, 2021 at the Canton-Potsdam Hospital. Al is survived by his six children, David Smith, Webster, NY; George and Nataliya Smith, Norfolk; Karen and Anthony "Mark" DeCare, Norfolk; Randy Smith, Gillett, PA; Sue Smith, Rock City Falls, NY and Tammy and Larry Villnave, Norfolk; his 12 beloved grandchildren, Travis and Chelsea Smith; Samantha and Matt Saxby; Greg and Sarah Smith; Robert and Mindi Smith; Kevin Smith; Sheila and Kevin Labier; Oleksandr and Polina Bashlachov; Benjamin and Sarrah Smith; Michelle Smith; Eric and Christine Sweet; Joella and Bernardo Amaro and Garrett and Patty Sweet and his 19 great-grandchildren with another child expected in October. Al is also survived by his adoptive children, Louise Gardner, DeKalb Junction; Merja Vikgren, Finland and Anna Kopecka', Slovakia as well as several nieces and nephews. Al was pre-deceased by his parents; his wife, Margaret "Peg", just one month ago and his twelve siblings, Lavern Smith, Oliver Smith, Woodrow Smith, Earl Smith, Marjorie Hough, Annabel Queor, Ruth Cole, Bernice Lavair, Joe Tyo, Marie Kohler, Helen Polin and Peter "Bud" Smith Jr. Born in Norfolk, NY on April 16, 1933 to the late Peter M. and Alice White Smith Sr., Al graduated from Norfolk High School in 1952 and was the High School Hockey Goalie. Upon his graduation, he served in the U.S. Air Force during the Korean Conflict from 1952-1956. He married Margaret "Peg" Belgarde on June 12, 1954. After serving his country, he started working for his father at P.M. Smith's Meat and Grocery Store and soon after, purchased it in 1956. In 1959 he changed the name to Al Smith's Superette, as which it is today. He along with his wife, Peg, operated the store for many years with their family and devoted employees. He also was a partner in opening Northern Marine Supplies in 1965, selling snowmobiles and outboard motors. He was awarded the NYS Junior Chamber of Commerce Distinguished Service Award in 1963 and was instrumental in the re-opening of the Norfolk Paper Mill. Al was very family and community oriented, being a member of the Norfolk Lions Club for over 60 years, as well as serving as the District 20W Governor from 1980-1981. He also was an active member of the Shriners, the Masons and the Norfolk American Legion. Al, along with a few others, started the tradition of putting lights up in town for Christmas. He enjoyed singing and traveling with his wife, spending winter months in Lakeland, Florida, playing shuffleboard and playing in the Kitchen Spoon Band as well as traveling to many places worldwide. He enjoyed taking donuts and other baked goods to businesses and his friends all over the North Country. For years during the summer, he would take all the grandchildren to the family camp on the Ruddy Road. Above all, Al Smith loved his family, Community and Town. In Lieu of flowers, memorial donations in Al's memory can be made to the Shriners Hospital or to the Norfolk United Methodist Church and memories and condolences may be shared online at www.buckfuneralhome.com . The Buck Funeral Home in Norfolk is serving the family of Alfred J. "Al" Smith.
To send flowers to the family or plant a tree in memory of Alfred Smith, please visit Tribute Store
Thursday
30
September

Share Your Memory of
Alfred
Upload Your Memory View All Memories
Be the first to upload a memory!
Share A Memory
Send Flowers
Plant a Tree