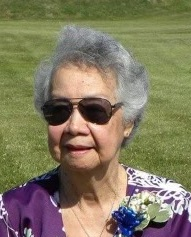 Please share a memory of Lucille to include in a keepsake book for family and friends.
View Tribute Book
NORWOOD – A Mass of Christian Burial for Lucille R. Penny, 90, a resident of 7 Whitney Street, Norwood, will be held on Thursday, August 5, 2021 at 10:30 a.m. at St. Andrew's Church in Norwood with Rev. Andrew Amyot presiding. Burial will be held in Calvary Cemetery, Norwood following the services. Family and friends may call at the Buck Funeral Home in Norwood on Wednesday, August 4, 2021 from 4-7 p.m. Lucille passed away Sunday morning, August 1, 2021 at the Canton-Potsdam Hospital after a long battle with heart disease. Born on September 1, 1930 in Honolulu, HI to the late Benjamin and Sarah Kaoao Hoke, she met and married the love of her life, Frank, when he was stationed in Hawaii with the U.S. Marine Corps. The married on May 8, 1948 and spent 57 years together before his death on August 28, 2005. They moved to Norwood where they raised their family. Lucille was a homemaker and was very proud of her heritage as an Asian American Pacific Islander and often spoke of her experiences as an AAPI woman in mainland America post WW II. Most people read of the attack on Pearl Harbor form history books but her family learned about it from her firsthand experience. She was 11 years old when it happened and told stories of being brought to mountain tunnel bunkers at night to hide out from further air strikes, eating SPAM and canned fruit cocktail. They were made to wear dogtags with ID numbers in case they were victims and blacking out the windows in their houses. Lucille enjoyed spending time with her family and friends, playing cards, having a strawberry daiquiris and traveling back to her beloved Hawaii. Lucille is survived by her three sons, Frank Jr. (Terry), Sierra Vista, AZ; Charles (Watana), Wichita, KS; Edward (Angela Wood), Norwood; her three daughters, Sharlene Penny (David Grove), Potsdam; Cathy (David) Fenton, Norwood and Patricia Penny, Norwood; her beloved ten grandchildren, Michael and Jennifer Penny, Christopher and Teresa Penny, Jennifer and Mike St. Pierre, Brian Penny, David and Jocelyn Fenton III, Nic and Brittany Garcia, Kimberly Fenton, Chelsea Cutler and Ben Steinberg and Alyssa Cutler and Michael Manor. Lucille is also survived by her ten great-grandchildren, Anthony, Charles and Nathan Penny, Carly, Max and Emile Fenton, Brycen and Caroline Garcia and Harrison and Theo Manor. She was pre-deceased by her parents, her husband Frank, her three brothers, Benjamin, Richard and Earl Cook, a sister, Lillian Cook and a great-granddaughter, Audrey Rose Fenton. The family would like to thank her Hospice care team of Jackie, Pam, Rochelle, Kim and Theresa for their care over the last two years and encourage memorial donations in Lucille's memory to be given to Hospice and Palliative Care of the St. Lawrence Valley and memories and condolences may be shared online at www.buckfuneralhome.com . The Buck Funeral Home in Norwood is serving the family of Lucille R. Penny.
To send flowers to the family or plant a tree in memory of Lucille Penny, please visit Tribute Store
Wednesday
4
August

Share Your Memory of
Lucille
Upload Your Memory View All Memories
Be the first to upload a memory!
Share A Memory
Send Flowers
Plant a Tree