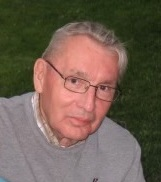 Obituary of David A. Hyde

Please share a memory of David to include in a keepsake book for family and friends.
View Tribute Book
COLTON—Calling hours for David A. Hyde, 87, a resident of 30 Crestwood Lane, Colton and his late wife Mary Lou Hyde, will be held on Wednesday, June 30, 2021 from 4-7 p.m. at the Buck Funeral Home in Colton. Mr. Hyde passed away on Sunday, June 20, 2021 at Champlain Valley Physicians Hospital in Plattsburg after a brief stay. Burial for David and MaryLou will be held privately. David is survived by his daughter, Patricia and Roy Williams, Plessis; his two sons, Robert Hyde, Massena and Mark Hyde, Webster; his beloved nine grandchildren and 16 great-grandchildren; two brothers, Dan and Shirley Hyde, CA; Frank and Nancy Hyde, Myrtle Beach; a sister, Virginia and Bob Snow, Potsdam as well as several nieces and nephews. David was pre-deceased by his parents and his late wife, MaryLou Hyde on March 18, 2020. Born in Liverpool, NY on September 19, 1933 to the late Clayton F. and Amy Crawford Hyde, David graduated from Solvay High School as well as Smith Technical School in Syracuse. He married MaryLou Sidmore on July 11, 1953. He worked as a Skilled Trades Supervisor for Reynold's Metal in Massena for over 30 years, retiring in 1988. David loved the outdoors, enjoying hunting, fishing and camping. He was the caretaker for the Weller Mountain Fish and Game Club for several years and also belonged to the Cranberry Lake Hunting Club. He was a member of the Edsel Owners Club and enjoyed spending time with his family and friends. Memorial donations in Dave's memory can be made to the Potsdam Humane Society or to the Alzheimer's Association and memories and condolences may be shared online at www.buckfuneralhome.com . The Buck Funeral Home is serving the family of David and MaryLou Hyde.
To send flowers to the family or plant a tree in memory of David Hyde, please visit Tribute Store
Wednesday
30
June