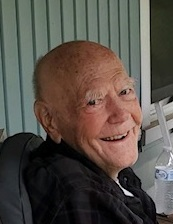 Please share a memory of Charles to include in a keepsake book for family and friends.
View Tribute Book
KNAPPS STATION – Funeral services for Charles P. Deleel, 87, a resident of 308 Stockholm-Knapp's Station Road, Potsdam, will be held at the Buck Funeral Home in Norwood on Tuesday, March 30, 2021 at 3 p.m. Burial will be held in the Calvary Cemetery, Norwood following the services. Family and friends may call at the Buck Funeral Home in Norwood on Tuesday from 1 p.m. until the time of the services at 3 p.m. Mr. Deleel passed away peacefully at his home on Friday morning, March 26, 2021 with his family at his side. Charles is survived by his wife of 59 years, Catherine, Knapp's Station; his son, Paul and Miranda Deleel, Potsdam; his two daughters, Holly Deleel, Massena; Tammy and Kevin Hartigan, Massena; his three beloved granddaughters, Joann and Joey Foster; Jessica Deleel and her companion Wesley Frank and Sara Deleel as well as his four great-grandchildren, Makenna, Ashton, Cameron and Addison. Charles is also survived by two brothers, Alfred Deleel, Gouverneur; Floyd and Nora Deleel, Knapp's Station; a sister, Ann Webster, Norwood; his favorite sister-in-law, Arlene Deleel, Rochester as well as several nieces and nephews. Charles was pre-deceased by his parents, his brothers Robert and Ralph Deleel and three sisters, Catherine Martell, Jane Webster Francher and Ellen Gaines. Born in Massena, NY on December 12, 1933 to the late Alfred and Edna Jacob Deleel, Charles married Catherine W. Baxter on August 19, 1961. Charles worked for Kraft Foods in North Lawrence for 24 years until his retirement in February of 1996. Charles previously worked for the St. Lawrence Seaway and Potsdam Laundry. In his spare time, Charles enjoyed reading -- the daily newspaper, his daily prayer books and livestock magazines, brushing his cat "Thumper" and playing solitaire. Charles however, found his most enjoyment came from spending time with his family, especially the grandchildren and great-grandchildren who were the joy of his life. Memorial donations in Charles memory can be made to Hospice and Palliative Care of the St. Lawrence Valley and memories and condolences may be shared online at www.buckfuneralhome.com . The Buck Funeral Home in Norwood is serving the family of Charles P. Deleel.
To send flowers to the family or plant a tree in memory of Charles Deleel, please visit Tribute Store
Tuesday
30
March

Share Your Memory of
Charles
Upload Your Memory View All Memories
Be the first to upload a memory!
Share A Memory
Send Flowers
Plant a Tree