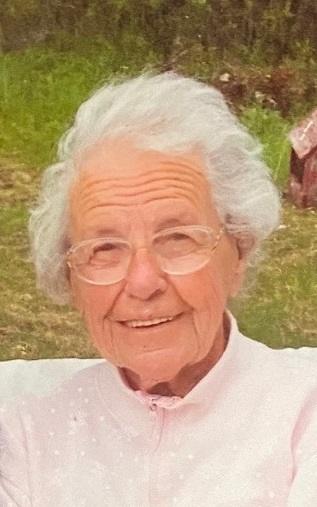 NORWOOD—Graveside services for 93 year old Florence H. Mousaw, a resident of 29 Ridge Street, Norwood, will be held in the Riverside cemetery at a later date to be announced. Mrs. Mousaw passed away Monday evening, June 29, 2020 at the United Helpers Maplewood Campus in Canton after a brief stay. Florence is survived by a son, Jimmy Mousaw, Potsdam; a daughter, Sherry and Neal Sherod, Seattle, WA; her five beloved grandchildren, Kaylie DeShane, Ryan Mousaw, Jenna Kilcoyne, Angela Lewis and Robert Sherod; her fourteen great-grandchildren; two sisters, Irene Peters, Potsdam and Linda and Alton Knapp, Greenwich; several nieces and nephews and her longtime companion, Harold Emlaw, Norfolk. Florence was pre-deceased by her parents, her husband Aaron, a son, Peter Mousaw and a sister, Myrtle Graves. Born in Potsdam, NY on March 20, 1927 to the late Ralph A. and Della-Mae Murray Trimm, Florence graduated from Norwood High School. She married Aaron A. Mousaw on December 4, 1947. He later passed away on September 12, 1992. Florence worked for the Ames Department Store in Potsdam for over 30 years and later worked at Perry's Supermarket in Norwood for several years. She was a member of the Norwood American Legion Auxiliary and enjoyed gardening, playing cards, crafting (stepping stones and woodworking) and taking occasional trips to the casino. Florence however, found her most enjoyment was time spent with her family and friends and the large gatherings she enjoyed hosting. Memorial donations in Florence's memory can be made to the Potsdam Rescue Squad and memories and condolences may be shared online at www.buckfuneralhomecom . The Buck Funeral Home in Norwood is serving the family of Florence H. Mousaw.
To send flowers to the family or plant a tree in memory of Florence Mousaw, please visit Tribute Store

Share Your Memory of
Florence
Upload Your Memory View All Memories
Be the first to upload a memory!
Share A Memory
Send Flowers
Plant a Tree