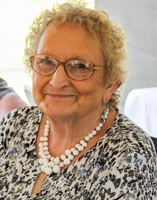 MADRID-- On August 28, 2022 Betty Lee (Goolden) Mattice passed away peacefully surrounded by family at the Buffalo Regional Hospital. Betty was born in Canton, NY to the late Mervin and Grace Carr Goolden on March 8, 1945. At sixteen years old, Betty married the love of her life George L. Mattice on June 25, 1961, who passed away on June 5, 2009 just shy of their 50th anniversary. Newly married, they began farming on Pearson Road in Madrid, NY. They went on to have four children; Brenda Rexford married to Alan Rexford of Canton, Robert "Bobby" Mattice of Madrid, Kimberlee McClellan of Milton, VT and George "Michael" Mattice of Madrid who passed away on January 9, 2001 at only seventeen. Spending time with her grandchildren was one of Betty's favorite things to do. She was blessed with 5 grandchildren and two great children whom she was very proud of and loved beyond words; Alisha Rexford and her husband David Antoine Gutierrez and their two sons Jackson and Grayson of Osgoode, Ontario, Canada, Aaron Rexford of Canton, Frederick Rexford of Canton, Emilee Heath and her husband Thomas of Enosburg, VT and Anya McClellan of Milton, VT. She also left behind her dog Buddy, a loving companion of many years. Anyone who knew Betty would describe her as one of the nicest, kind hearted, and sweetest people they had ever met. Her love had no limits or judgements, she accepted everyone as they were. She would often put others' needs before her own. She was a selfless, positive person who would try to find the good in every scenario, even during her battle with Breast Cancer beginning in 2013. Betty had a strong faith in God's plan and this gave her an unwavering resilience despite all of life's challenges. Betty loved garage sales and thrift stores. She loved dressing up and always looking nice. God forbid if someone saw her "without her face on." She always looked beautiful to us. She also loved live music and most of all visiting her son Bobby at the ARC in Madrid on Sunday afternoons. After George passed she moved in with her Sister and best friend Jackie Innes Brown of Ogdensburg. The two of them together was something magical, a sisterly bond like no other. They played Skip-bo and put puzzles together….thousands of puzzles. Their laughing was contagious and fun. We are so happy that our mother got to spend her last year's laughing and playing cards and being with the people she loved. She will be greatly missed by all that knew her. Memorial Donations can be made to https://www.specialolympics-ny.org/ and memories and condolences can be left at www.buckfuneralhome.com. We have decided to celebrate our mothers life with a celebration of life ceremony which will happen at a later date. Invitations to follow. The Buck Funeral Home is serving the family of Betty L. Mattice.