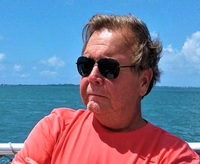 MASSENA / PORT CHARLOTTE, FL — A Celebration of Life for Clifton R. "Jabo" Anderson, 68, a resident of Massena and Port Charlotte, FL, will be held on Sunday, September 18, 2022 from 1-4 p.m. at the Massena Elks Lodge. Cliff passed away peacefully after a hard-fought battle with cancer/side effects of treatments with family by his side on May 30,2022 in Florida. Heaven gained a loving husband, father, brother and friend. Jabo was born December 22, 1953 at Tyndall Air force Base in Panama City, Florida. He served proudly in the U.S. Army and later was as a member of the American Legion, Elks and Am Vets. Cliff is survived by his loving wife, soulmate and best friend Cindy Clary, his daughter Rebekah Anderson, step-son Matt Clary, and step-daughter Lura Scalf; his brothers, Robert (Maria) Anderson, Dale (Patricia) Anderson Jr.; sister, Anna Hellman, numerous nephews, nieces and granddaughters. He was pre-deceased by father Cleo Dale Anderson Sr., his mother Frednearl Hill Eden, maternal grandfather Harvey Hill, maternal grandmother, whom he loved dearly and affectionately called "Miniemaw" Minnie Mayo Hill, paternal grandparents Louis Sylvester and Anna Anderson, uncles Willie Edward Hill and Joe Hill. Jabo took pride in his lifetime profession in the drywall industry from hanging drywall to finishing and texturing. He was a "Jack of all Trades". He loved sports, betting on games, fishing and even fished in the Redman series years ago. He was happiest when he could spend time with family and friends and have grand ole BBQ's and fish fry's, with his bourbon and waters. He treasured life with family and friends and tried to help all those he could. His last words spoken to his family/friends was that he lived a wonderful (Cindy calls it a colorful) life and that he loved everyone. Memories and condolences may be shared online at www.buckfuneralhome.com The Buck Funeral Home is serving the family of Clifton R. "Jabo" Anderson.