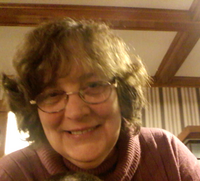 CHASE MILLS – Funeral services for Nancy I. O'Leary, 67, a resident of Arena Drive, Chase Mills, will be held in the springtime with burial to be held in Bixby Cemetery, Norfolk. Nancy passed away on New Year's Eve at her home. Nancy is survived by her daughters, Lisa and Joshua Tessier, Ft. Wayne, Indiana; Heather and Ervin Caballes, Denver, Colorado; Sara Perry and her companion Matthew Arcet, Chase Mills; her beloved 12 grandchildren and one great-grandson. Nancy is also survived by three brothers, Kenneth and Karen Laramay, Woodland Hills, CA; Michael and Michelle Laramay, Louisville; Thomas and Darlene Laramay, Liverpool; two sisters, Christine Harrington, Dewitt, Michigan and Diana and Scott Plummer, Georgia as well as several nieces and nephews. Nancy was pre-deceased by her parents, two sons, Jason O'Leary and Jeremy O'Leary and a sister, Mary Laramay. Born in Potsdam, NY on April 13, 1954 to the late Richard K. and Irene Pircsuk Laramay, she graduated from Norwood-Norfolk Central School. Nancy also graduated from the Massena School of Business and received an Associate's Degree from Mater Dei College. A marriage to Joseph O'Leary on August 6, 1974 later ended in divorce. Nancy was a devoted homemaker and enjoyed reading, crosswords, and puzzles. Nancy is missed and loved dearly by her friends and family, including her dog, Yoda. She was a communicant of the Northside Community Church in Massena and was active with the church's Bible Study. Memorial donations in Nancy's memory can be made to NAMI and memories and condolences may be shared online at www.buckfuneralhome.com .