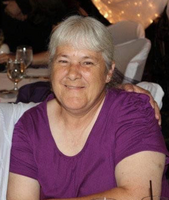 MADRID—Funeral services for Deborah A. Gravlin, 69, a resident of 327 Hardscrabble Road, Madrid, will be held on Saturday, October 30, 2021 at 2 p.m. at the Buck Funeral Home in Norwood with Rev. Garry Giroux presiding. Debbie passed away Tuesday morning, October 19, 2021 at her home with her family at her side. Debbie is survived by her husband of 49 years, Stephen, Madrid; two sons, Stephen and Elizabeth Gravlin Jr., Madrid; David and Emily Gravlin, Lisbon; her beloved six grandchildren, Alex, Adam, Emma, Faith, Tyler and Lucas Gravlin; her mother, Patricia Bouchard, Waddington. Debbie is also survived by two brothers, Robert "Bob" and Connie Sova, FL; Richard "Richie" and Angela Tynon, SC and two sisters, Karen and George Mowry, FL and Tina Martin, Lisbon. Debbie is predeceased by her father and step-mother, Richard "Dick" and Marie Tynon and her step-father, Robert "Bob" Bouchard. Born in Ogdensburg, NY on November 8, 1951, the daughter of Richard and Patricia LaRue Tynon, Debbie graduated from Norwood-Norfolk Central School and married Stephen A. Gravlin Sr. on September 16, 1972. As well as being a wonderful homemaker for her family, Debbie most recently worked as a custodian at SUNY Canton, retiring after nearly 20 years of dedicated service and previously worked at the Lucille Farms Cheese Factory, Shade Roller and ACCO in Ogdensburg. In her free time, Debbie enjoyed decorating for the holidays, especially Christmas, she enjoyed fishing with her husband, and truly enjoyed spending time with her family, friends and especially her grandchildren. Her family pets were near and dear to her. She was a wonderful and devoted daughter, wife, mother and grandmother who will be missed dearly. In lieu of flowers, memorial donations in Debbie's memory can be made to the Ogdensburg SPCA and memories and condolences may be shared online at www.buckfuneralhome.com .